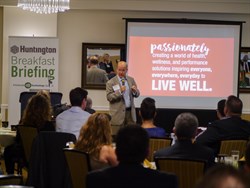 Held about 8 times a year since 1984, Breakfast Briefings were a staple in the diets of Pittsburgh professionals. The morning events presented visionaries whose work set the standards for best business practices around the corner and around the world. In 2022, this series was revamped as the Huntington Bank CEO Series and presents the same local leaders but sessions now take place throughout the work day, not only during breakfast!

If you know a CEO who’s interested in speaking at a Huntingon Bank CEO Series event, contact Allison Kaharick. 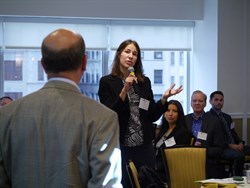 This series has featured a tremendous who's who list of world renowned thought and business leaders:

If you have any additional questions or would like to schedule an introductory call, please contact Tarelle Irwin at tirwin@fortyx80.org! https://t.co/KcVsvNybOX

Listen to Dan Simkins detail how DX Performance creates a strategic marketing plan customized to your needs and goals. https://t.co/NRFTZxhMvu

Some of you have requested more time to complete your applications for the 2023 EDGE Women's Leadership Program—ask and you shall receive! The extended deadline is now Friday, Dec. 16! Learn more, sign up for an Info Session, or apply at https://t.co/N10eh2SChz
@EdgeLeadershipS https://t.co/MKTuxWOwrU

TechVibe Radio welcomes Crown Castle to detail the finalized contract with the #Pittsburgh to provide the first unified fiber connectivity network for city facilities as part of the NetPGH initiative. https://t.co/M1IjWQX57k

Meet Dina, our Pet of the Week from @HARPSavesLives

Dina is a thick senior lady in need of some TLC from her forever family. She is affectionate, enjoys cheek and chin scratches and is attentive to her caretakers. She will ensure you feel appreciated for all your loving care! https://t.co/geEf1htsEN