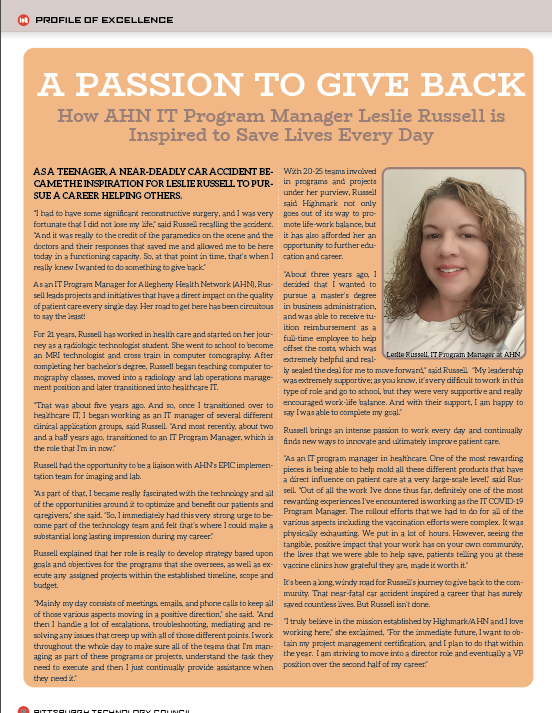 As a teenager, a near-deadly car accident became the inspiration for Leslie Russell to pursue a career helping others.

“I had to have some significant reconstructive surgery, and I was very fortunate that I did not lose my life,” said Russell recalling the accident. “And it was really to the credit of the paramedics on the scene and the doctors and their responses that saved me and allowed me to be here today in a functioning capacity. So, at that point in time, that’s when I really knew I wanted to do something to give back.”

As an IT Program Manager for Allegheny Health Network (AHN), Russell leads projects and initiatives that have a direct impact on the quality of patient care every single day. Her road to get here has been circuitous to say the least!

For 21 years, Russell has worked in health care and started on her journey as a radiologic technologist student. She went to school to become an MRI technologist and cross train in computer tomography. After completing her bachelor’s degree, Russell began teaching computer tomography classes, moved into a radiology and lab operations management position and later transitioned into healthcare IT.

“That was about five years ago. And so, once I transitioned over to healthcare IT, I began working as an IT manager of several different clinical application groups, said Russell. “And most recently, about two and a half years ago, transitioned to an IT Program Manager, which is the role that I’m in now.”

Russell had the opportunity to be a liaison with AHN’s EPIC implementation team for imaging and lab.

“As part of that, I became really fascinated with the technology and all of the opportunities around it to optimize and benefit our patients and caregivers,” she said. “So, I immediately had this very strong urge to become part of the technology team and felt that’s where I could make a substantial long lasting impression during my career.”

Russell explained that her role is really to develop strategy based upon goals and objectives for the programs that she oversees, as well as execute any assigned projects within the established timeline, scope and budget.

“Mainly my day consists of meetings, emails, and phone calls to keep all of those various aspects moving in a positive direction,” she said. “And then I handle a lot of escalations, troubleshooting, mediating and resolving any issues that creep up with all of those different points. I work throughout the whole day to make sure all of the teams that I’m managing as part of these programs or projects, understand the task they need to execute and then I just continually provide assistance when they need it.”

With 20-25 teams involved in programs and projects under her purview, Russell said Highmark not only goes out of its way to promote life-work balance, but it has also afforded her an opportunity to further education and career.

“About three years ago, I decided that I wanted to pursue a master’s degree in business administration, and was able to receive tuition reimbursement as a full-time employee to help offset the costs, which was extremely helpful and really sealed the deal for me to move forward,” said Russell.  “My leadership was extremely supportive; as you know, it’s very difficult to work in this type of role and go to school, but they were very supportive and really encouraged work-life balance. And with their support, I am happy to say I was able to complete my goal.”

“As an IT program manager in healthcare. One of the most rewarding pieces is being able to help mold all these different products that have a direct influence on patient care at a very large-scale level,” said Russell. “Out of all the work I’ve done thus far, definitely one of the most rewarding experiences I’ve encountered is working as the IT COVID-19 Program Manager. The rollout efforts that we had to do for all of the various aspects including the vaccination efforts were complex. It was physically exhausting. We put in a lot of hours. However, seeing the tangible, positive impact that your work has on your own community, the lives that we were able to help save, patients telling you at these vaccine clinics how grateful they are, made it worth it.”

It’s been a long, windy road for Russell’s journey to give back to the community. That near-fatal car accident inspired a career that has surely saved countless lives. But Russell isn’t done.

“I truly believe in the mission established by Highmark/AHN and I love working here,” she exclaimed, “For the immediate future, I want to obtain my project management certification, and I plan to do that within the year.  I am striving to move into a director role and eventually a VP position over the second half of my career.”