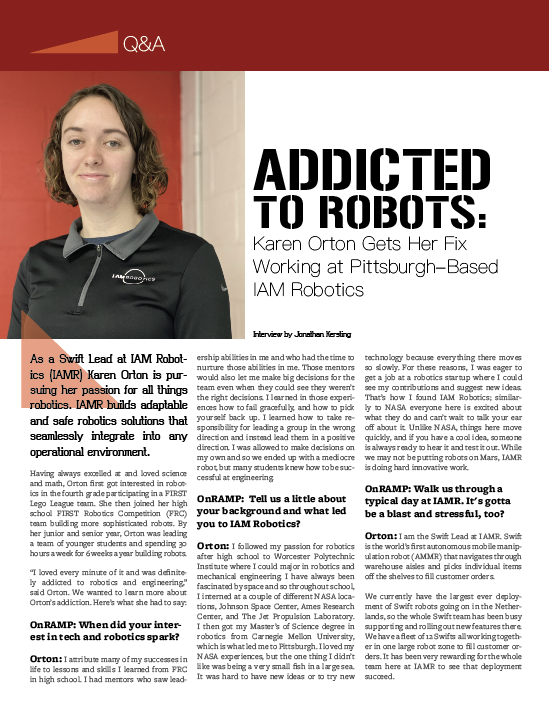 As a Swift Lead at IAM Robotics (IAMR) Karen Orton is pursuing her passion for all things robotics. IAMR builds adaptable and safe robotics solutions that seamlessly integrate into any operational environment.

Having always excelled at and loved science and math, Orton first got interested in robotics in the fourth grade participating in a FIRST Lego League team. She then joined her high school FIRST Robotics Competition (FRC) team building more sophisticated robots. By her junior and senior year, Orton was leading a team of younger students and spending 30 hours a week for 6 weeks a year building robots.

“I loved every minute of it and was definitely addicted to robotics and engineering,” said Orton. We wanted to learn more about
Orton’s addiction. Here’s what she had to say:

OnRAMP: When did your interest in tech and robotics spark?

Orton: I attribute many of my successes in life to lessons and skills I learned from FRC in high school. I had mentors who saw leadership abilities in me and who had the time to nurture those abilities in me. Those mentors would also let me make big decisions for the team even when they could see they weren’t the right decisions. I learned in those experiences how to fail gracefully, and how to pick yourself back up. I learned how to take responsibility for leading a group in the wrong direction and instead lead them in a positive direction. I was allowed to make decisions on my own and so we ended up with a mediocre robot, but many students knew how to be successful at engineering.

OnRAMP:  Tell us a little about your background and what led you to IAM Robotics?

Orton: I followed my passion for robotics after high school to Worcester Polytechnic Institute where I could major in robotics and mechanical engineering. I have always been fascinated by space and so throughout school, I interned at a couple of different NASA locations, Johnson Space Center, Ames Research Center, and The Jet Propulsion Laboratory. I then got my Master’s of Science degree in robotics from Carnegie Mellon University, which is what led me to Pittsburgh. I loved my NASA experiences, but the one thing I didn’t like was being a very small fish in a large sea. It was hard to have new ideas or to try new technology because everything there moves so slowly. For these reasons, I was eager to get a job at a robotics startup where I could see my contributions and suggest new ideas. That’s how I found IAM Robotics; similarly to NASA everyone here is excited about what they do and can’t wait to talk your ear off about it. Unlike NASA, things here move quickly, and if you have a cool idea, someone is always ready to hear it and test it out. While we may not be putting robots on Mars, IAMR is doing hard innovative work.

OnRAMP: Walk us through a typical day at IAMR. It's gotta be a blast and stressful, too?

Orton: I am the Swift Lead at IAMR. Swift is the world’s first autonomous mobile manipulation robot (AMMR) that navigates through warehouse aisles and picks individual items off the shelves to fill customer orders.

We currently have the largest ever deployment of Swift robots going on in the Netherlands, so the whole Swift team has been busy supporting and rolling out new features there. We have a fleet of 12 Swifts all working together in one large robot zone to fill customer orders. It has been very rewarding for the whole team here at IAMR to see that deployment succeed.

I spend some of my time designing and developing new features for Swift to make it work better and more reliably for our customers. I also spend a lot of my time testing for and finding various bugs that get into our software as we develop these new features. I love this part of my job because it’s just like the logic puzzles I used to do as a kid. You get lots of different little clues as to what piece of the software is causing the issue and I get to put all the clues together to solve the puzzle. I love solving software bugs because in the end you always discover it’s doing exactly what you told it to do, and you just have to tell it to do something else instead.

As Swift Lead, I get to do a lot of mentoring of younger developers. I have always loved teaching and sharing knowledge, so I love getting to share everything I’ve learned about Swift with newer team members.

OnRAMP:  How can we get more students interested in math, science, engineering?

Orton: Math, science and engineering are stereotypically “hard” subjects. In some cases, this is true, but I believe “hard” is relative to one’s skill set. For example, learning a second language was extremely difficult for me; however, an advanced software class was a piece of cake. I believe when we introduce kids to math and science, either at school or through their parents, we need to stop telling them we expect it to be hard. Math, science and engineering are creative and fun; they allow you to be curious about the world around you and to explore it. Kids should be free to try art, language, math, science and decide for themselves what they love and what is harder for them to understand.

OnRAMP: Thoughts on Pittsburgh as a robotics hub?

Orton: I absolutely love Pittsburgh. For me, it’s a perfect mix of a small town and a large city. Big enough, there’s lots of great food and things to do. It doesn’t feel like a massive city either, lots of neighborhoods are very walkable, and people know their neighbors. I am excited Pittsburgh is growing into a larger robotics hub, it brings in more talent and companies doing innovative work to the area. I love Pittsburgh over other robotics hubs because it’s also home to many other industries, so there is a good mix of diverse backgrounds and interests here. I believe it is exactly this diversity of background and thought that gives Pittsburgh an edge and fosters new creative solutions to the hard technical challenges we are trying to solve.