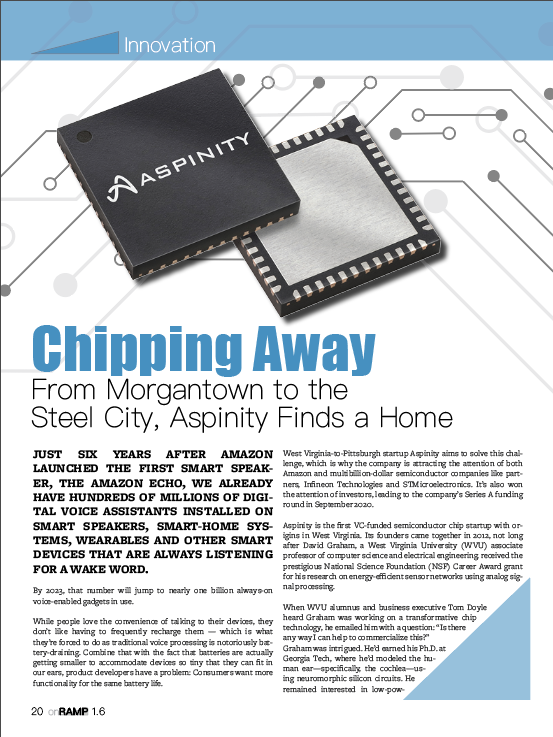 Just six years after Amazon launched the first smart speaker, the Amazon Echo, we already have hundreds of millions of digital voice assistants installed on smart speakers, smart-home systems, wearables and other smart devices that are always listening for a wake word.

By 2023, that number will jump to nearly one billion always-on voice-enabled gadgets in use.

While people love the convenience of talking to their devices, they don’t like having to frequently recharge them — which is what they’re forced to do as traditional voice processing is notoriously battery-draining. Combine that with the fact that batteries are actually getting smaller to accommodate devices so tiny that they can fit in our ears, product developers have a problem: Consumers want more functionality for the same battery life.

West Virginia-to-Pittsburgh startup Aspinity aims to solve this challenge, which is why the company is attracting the attention of both Amazon and multibillion-dollar semiconductor companies like partners, Infineon Technologies and STMicroelectronics. It’s also won the attention of investors, leading to the company’s Series A funding round in September 2020.

When WVU alumnus and business executive Tom Doyle heard Graham was working on a transformative chip technology, he emailed him with a question: “Is there any way I can help to commercialize this?”

Graham was intrigued. He’d earned his Ph.D. at Georgia Tech, where he’d modeled the human ear—specifically, the cochlea—using neuromorphic silicon circuits. He remained interested in low-power, bio-inspired audio systems after landing his academic position at WVU, and this time developed a reconfigurable analog “ear” that could identify motor vehicles vs. other moving objects.

Like legions of engineers before and since, Graham’s early designs were highly influenced by Carver Mead, the legendary scientist who created an analog retina and inner ear in silicon. It was Mead who popularized the concept of neuromorphic electronic systems, which use analog circuits to mimic neuro-biological architectures present in the human nervous system, back in the 1980s.

“Moving our headquarters to Pittsburgh has allowed us to remain near our roots as we build our company in a booming Midwestern tech town where we can flourish alongside Uber, Bosch, Apple, Amazon, Google, and Zoom,” he says. “That Pittsburgh is also home to Carnegie Mellon, one of the country’s top engineering schools, was another major consideration for the founders.” 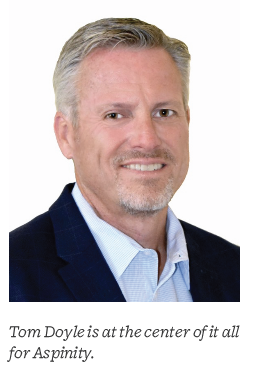 Arriving at Georgia Tech a little more than a decade after Mead first conceived of neuromorphic computing, Graham’s connection to the famed scientist was closer than most of his generation: One of Mead’s last graduate students was Graham’s doctoral advisor at the prestigious engineering school.

“I’m very fortunate to have had Jennifer Hasler as my doctoral advisor at Georgia Tech,” says Graham. “I learned first-hand the importance of neuro-inspired computing from someone who’d studied with the architect of the concept.” Graham’s work as a graduate student first formed his passion for neuromorphic analog design, sowing the seeds of the company that would become Aspinity.

In the years between Graham and Doyle’s first conversation, and the signing of a licensing agreement with WVU in 2015—an event Doyle credits with starting Aspinity in earnest—the two explored the application space. With the help of Graham’s former doctoral student-turned Aspinity co-founder and CTO Brandon Rumberg and some early funding from WVU, Graham got to work prototyping analog chips that tackle the power-consumption issues people have with hands-free voice-first products that are always listening to their environment.

From smart earbuds and voice-activated TV remote controls to acoustic event-detection devices such as glass-break systems and CO alarms, these always-listening devices continuously process massive volumes of incoming sound data so they don’t miss an important keyword or a specific acoustic trigger—a largely power-inefficient method that treats all sound data as equally important when in fact, the majority of the sound is just irrelevant noise. Committed to finding a more efficient way for devices to sift through all this data, Graham was certain he could find the answer by mimicking the efficiency of the sensory system of the brain in a neuromorphic chip design.

Since moving from R&D to commercial product is a challenge for any young company, Graham and Rumberg tapped Doyle’s business savvy, entrepreneurial spirit and extensive corporate experience to help the company make the leap from academic research to funded startup.

In 2017, Aspinity was invited to join the inaugural Alexa Accelerator, a joint program between Amazon and Techstars to advance the Alexa speech assistant in smart speakers, smart home systems, IoT devices and countless other smart products.

It was Doyle’s foresight, Graham says, that encouraged the WVU scientists to extend their audio work to the growing array of voice applications. “Tom got us into the Amazon incubator program — and he’s continued to build that relationship ever since,” he says.

Just 14 months after completing their stint in the accelerator, Aspinity would amass $3.5 million in seed funding, and then an additional $5.3M in Series A funding just 20 months later. Graham’s fellow founder Rumberg says he hopes that Aspinity will be considered proof that West Virginia, and in particular, intellectual property from WVU, should be on the radar screens of venture investors.

Though the company’s origins will always be in Morgantown, West Virginia—where Graham remains at his academic post—Rumberg and Doyle have transplanted the company headquarters 75 miles away to Pittsburgh, which offers a more fertile foundation for a tech company that needs a deep pool of engineering talent. And with most of the company’s funding coming from outside Silicon Valley, there is no pressure to relocate.

“Moving our headquarters to Pittsburgh has allowed us to remain near our roots as we build our company in a booming Midwestern tech town where we can flourish alongside Uber, Bosch, Apple, Amazon, Google, and Zoom,” he says. “That Pittsburgh is also home to Carnegie Mellon, one of the country’s top engineering schools, was another major consideration for the founders.”

Aspinity is also forging relationships with some of the semiconductor industry’s most influential players. In December 2019, Aspinity announced the world’s first demonstration of an ultra-low-power analog voice wake-up system for battery-operated devices with two of STMicroelectronics’ most popular microcontrollers.

And in May 2020, Aspinity announced a partnership with Infineon Technologies that will speed development of battery-operated always-on sensing products for consumer and IoT applications, using Infineon’s XENSIV family of sensors. With friends like that—plus a Series A round that includes a third round of investment funds from Amazon, the biggest player in voice-assistant devices—Aspinity’s on the road to a promising future.