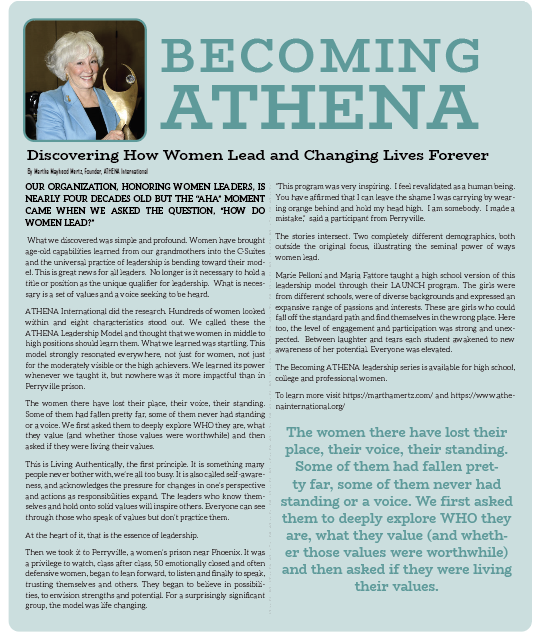 Our organization, honoring women leaders, is nearly four decades old but the “AHA” moment came when we asked the question, “How do Women lead?”

What we discovered was simple and profound. Women have brought age-old capabilities learned from our grandmothers into the C-Suites and the universal practice of leadership is bending toward their model. This is great news for all leaders.  No longer is it necessary to hold a title or position as the unique qualifier for leadership.  What is necessary is a set of values and a voice seeking to be heard.

ATHENA International did the research. Hundreds of women looked within and eight characteristics stood out. We called these the ATHENA Leadership Model and thought that we women in middle to high positions should learn them. What we learned was startling. This model strongly resonated everywhere, not just for women, not just for the moderately visible or the high achievers. We learned its power whenever we taught it, but nowhere was it more impactful than in Perryville prison.

The women there have lost their place, their voice, their standing.  Some of them had fallen pretty far, some of them never had standing or a voice. We first asked them to deeply explore WHO they are, what they value (and whether those values were worthwhile) and then asked if they were living their values.

This is Living Authentically, the first principle. It is something many people never bother with, we’re all too busy. It is also called self-awareness, and acknowledges the pressure for changes in one’s perspective and actions as responsibilities expand. The leaders who know themselves and hold onto solid values will inspire others. Everyone can see through those who speak of values but don’t practice them.

At the heart of it, that is the essence of leadership.

Then we took it to Perryville, a women’s prison near Phoenix. It was a privilege to watch, class after class, 50 emotionally closed and often defensive women, began to lean forward, to listen and finally to speak, trusting themselves and others. They began to believe in possibilities, to envision strengths and potential. For a surprisingly significant group, the model was life changing.

“This program was very inspiring.  I feel revalidated as a human being.  You have affirmed that I can leave the shame I was carrying by wearing orange behind and hold my head high.  I am somebody.  I made a mistake,”  said a participant from Perryville.

The stories intersect. Two completely different demographics, both outside the original focus, illustrating the seminal power of ways women lead.

Marie Pelloni and Maria Fattore taught a high school version of this leadership model through their LAUNCH program. The girls were from different schools, were of diverse backgrounds and expressed an expansive range of passions and interests. These are girls who could fall off the standard path and find themselves in the wrong place. Here too, the level of engagement and participation was strong and unexpected.  Between laughter and tears each student awakened to new awareness of her potential. Everyone was elevated.