Members of Team Explorer stood in an open cavern deep into DARPA's final course of the Subterranean Challenge.

They had already walked through a mine, a cave and an abandoned subway station, all built inside the Mega Cavern in Louisville, Kentucky. 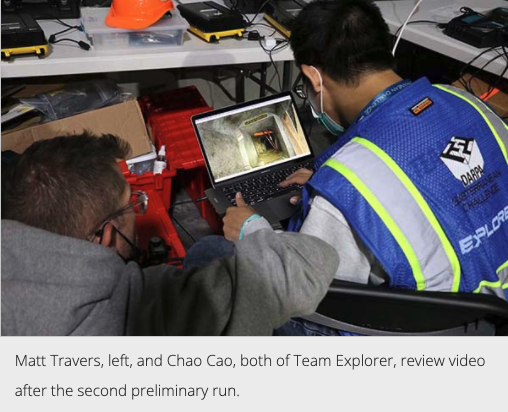 “That’s impressive. We got most of it,” Matt Travers, a team co-lead, said looking at a course map posted in the cavern. “We explored almost all of the map.”

Team Explorer lived up to its name during the final round of the Defense Advanced Research Projects Agency's Subterranean (SubT) Challenge. The team’s fleet of robots mapped nearly the entire course and explored more of the course than any other team.

The team, made up of students, faculty and staff from Carnegie Mellon University and Oregon State University, placed fourth in the final round of DARPA's SubT Challenge, scoring 17 points.

CERBERUS took first, with 23 points and won the $2 million top prize. CSIRO Data61 placed second and scored the same number of points as CERBERUS. DARPA broke the tie by awarding first place to the team that found an object the fastest. MARBLE got third.

"I'm proud of this team. This was hard, and we really rose to the challenge," said Travers, a systems scientist at CMU's Robotics Institute in the School of Computer Science.

The challenge started three years ago. The team still uses the first robot it built; a 400-pound beast of a ground robot on wheels named R1. Through the years, Team Explorer has added two more ground robots, R2 and R3, a legged Spot robot made by Boston Dynamics, and seven drones – four smaller ones capable of launching off the back of R1 and R2 and three larger ones built with Canary Aerospace, a startup company that CMU spun off during the competition.

In the SubT Challenge, the robots must autonomously map underground environments and look for objects, such as backpacks, emergency equipment, hazards and even simulated human survivors.  As robots find objects, they report their locations back to the team, which can then submit it to DARPA. Identifying an object in its correct location scores a point. 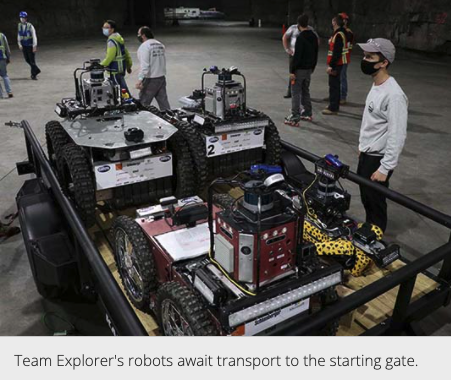 The challenge aims to develop technologies needed by military and civilian first responders to operate in underground environments that are potentially unsafe for humans. Team Explorer's research has already been recognized with two best paper awards at recent robotics conferences. Members of the team specializing in drones are staying in Louisville after the competition to fly the course and gather more data for an upcoming paper.

"They are doing the fundamental research that will make this potentially life-saving technology possible," said team co-lead Geoff Hollinger, an associate professor of mechanical engineering at Oregon State and a CMU robotics alumnus. "And Team Explorer has already proven that their approach is among the best in the field and has a pathway to commercialization."

Team Explorer spent a week in Louisville for the final event. The final course incorporated elements of the previous rounds of the challenge, tunnel, urban and cave circuits. Team Explorer won the tunnel circuit and placed second in urban. The cave circuit was canceled due to the pandemic.

The team worked late into the night and early morning each day tweaking their robots and the software controlling them. After preliminary runs on Tuesday and Wednesday, the team was in second place.

The score sheets were wiped clean for the final run. Team Explorer sent in eight robots, its three ground robots, the dog-like Spot, three smaller drones and one large drone. After an hour of searching, the team submitted 17 objects to DARPA.

The robots explored all but two sections of the course. R3, the team's smallest ground robot, but still weighing a couple hundred pounds, made a daring ascent of a steep, muddy slope deep in the course. It searched the area at the top of the course, explored right to the edge of a cliff and then fell, tumbling about 20 feet.

When the team returned to its garage after the final run, R3's roll cage was bent and covered in mud, and the team cheered its performance. As Team Explorer packed up its garage and loaded the robots in a box truck for the trip back to CMU, the team knew this wouldn't be the last time they would see R1, R2 or even the muddy and damaged R3.

"This challenge has created amazing solutions that were science fiction three years ago and raised a decade's worth of new challenges," Scherer said.  "Looking forward to the future."