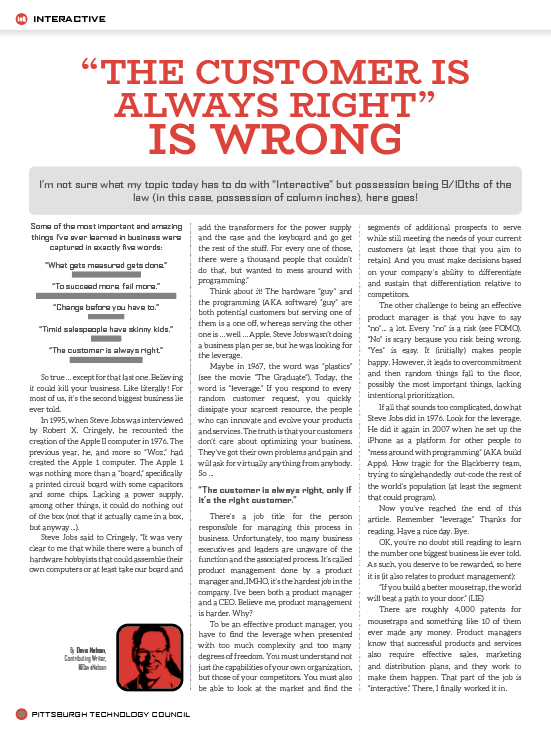 I’m not sure what my topic today has to do with “Interactive” but possession being 9/10ths of the law (in this case, possession of column inches), here goes!

Some of the most important and amazing things I’ve ever learned in business were captured in exactly five words:

“What gets measured gets done.”
– Rheticus (16th century)

“Change before you have to.”
– Jack Welch

So true … except for that last one. Believing it could kill your business. Like literally! For most of us, it’s the second biggest business lie ever told.

In 1995, when Steve Jobs was interviewed by Robert X. Cringely, he recounted the creation of the Apple II computer in 1976. The previous year, he, and more so “Woz,” had created the Apple 1 computer. The Apple 1 was nothing more than a “board,” specifically a printed circuit board with some capacitors and some chips. Lacking a power supply, among other things, it could do nothing out of the box (not that it actually came in a box, but anyway…).

Steve Jobs said to Cringely, “It was very clear to me that while there were a bunch of hardware hobbyists that could assemble their own computers or at least take our board and add the transformers for the power supply and the case and the keyboard and go get the rest of the stuff. For every one of those, there were a thousand people that couldn’t do that, but wanted to mess around with programming.”

Think about it! The hardware “guy” and the programming (AKA software) “guy” are both potential customers but serving one of them is a one off, whereas serving the other one is … well … Apple. Steve Jobs wasn’t doing a business plan per se, but he was looking for the leverage.

Maybe in 1967, the word was “plastics” (see the movie “The Graduate”). Today, the word is “leverage.” If you respond to every random customer request, you quickly dissipate your scarcest resource, the people who can innovate and evolve your products and services. The truth is that your customers don’t care about optimizing your business. They’ve got their own problems and pain and will ask for virtually anything from anybody. So …

“The customer is always right, only if it’s the right customer.”

To be an effective product manager, you have to find the leverage when presented with too much complexity and too many degrees of freedom. You must understand not just the capabilities of your own organization, but those of your competitors. You must also be able to look at the market and find the segments of additional prospects to serve while still meeting the needs of your current customers (at least those that you aim to retain). And you must make decisions based on your company’s ability to differentiate and sustain that differentiation relative to competitors.

The other challenge to being an effective product manager is that you have to say “no”… a lot. Every “no” is a risk (see FOMO). “No” is scary because you risk being wrong. “Yes” is easy. It (initially) makes people happy. However, it leads to overcommitment and then random things fall to the floor, possibly the most important things, lacking intentional prioritization.

If all that sounds too complicated, do what Steve Jobs did in 1976. Look for the leverage. He did it again in 2007 when he set up the iPhone as a platform for other people to “mess around with programming” (AKA build Apps). How tragic for the Blackberry team, trying to singlehandedly out-code the rest of the world’s population (at least the segment that could program).

Now you’ve reached the end of this article. Remember “leverage.” Thanks for reading. Have a nice day. Bye.

OK, you’re no doubt still reading to learn the number one biggest business lie ever told. As such, you deserve to be rewarded, so here it is (it also relates to product management):

“If you build a better mousetrap, the world will beat a path to your door.” (LIE)

There are roughly 4,000 patents for mousetraps and something like 10 of them ever made any money. Product managers know that successful products and services also require effective sales, marketing and distribution plans, and they work to make them happen. That part of the job is “interactive.” There, I finally worked it in.