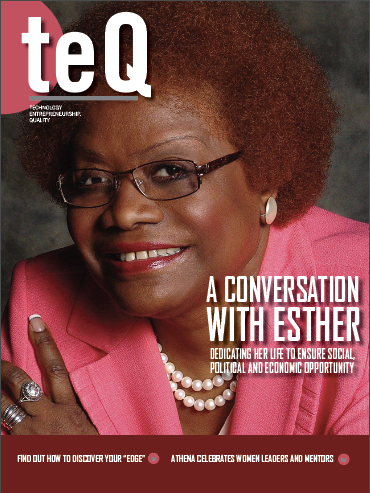 Leading the Urban League of Greater Pittsburgh for 27 years, Esther Bush is one of Pittsburgh’s most recognizable leaders in the effort to secure economic self-reliance, parity, power and civil rights for African Americans.

As the President and CEO of the Urban League of Greater Pittsburgh, Bush has established herself as a voice of reason, a coalition builder and a force for positive change not just in the Pittsburgh community, but across the nation.

Bush has transformed the region as an advocate of social and economic equality. Under her leadership, the Urban League of Greater Pittsburgh has become a top performing affiliate, and she has been instrumental in the development of many programs to benefit African American youth, including the ULPGH Charter School, the African American Achievement Trust and the Black Male Leadership Development Institute.

Bush announced her retirement from the Urban League of Greater Pittsburgh this spring, and TEQ wanted to learn more about Bush and her journey to make Pittsburgh a better place for everyone. Who better to interview Bush than Pittsburgh Technology Council President and CEO Audrey Russo? Serving as Secretary on the Urban League’s Board of Directors, Russo is passionate to create a thriving tech ecosystem that is underpinned by creating opportunity for everyone looking to participate.

The following editorial is an edited excerpt of the Bush-Russo interview. Listen to the entire interview here.

And don’t worry, Bush might be retiring, but she is definitely not going away! Here’s a taste of what Audrey and Esther talked about:

A lot of people think they know when they really don’t. The mission of the Urban League is to assist African Americans to achieve economic self-reliance, parody and power and civil rights. And we do that by providing direct social service programming, advocacy, and research. The advocacy is what a lot of people see if it were the equal rights and opportunities.

I always say we’re at an inflection point, but since Covid-19 and the murder of George Floyd, I think we are at this new chapter.

We absolutely are and everybody needs to own where we are. Because if you are alive, you have a role to play. It is not pointing fingers. What is the Urban League doing? Or what is the Tech Council? It’s “What are you doing, personally, to help?”

You know, it’s interesting, because here we are at this inflection point that I hope has created an awareness and a momentum. But here is Pittsburgh, where you’re telling a story about your family coming up from the deep south and saying they see they have hope, and hope for a better life, for more prosperity, more equity, parity, etc. And yet, recently, we’re having stories of black flight in Pittsburgh…And we also have this recognition, in a negative way, of being a place where maternal health is one of the lowest in the United States. So, after all these years of your own family, your own family’s activism and acknowledgment and hope for a better life. Look where we are. Are we
better?

Audrey, I think some of us are better. And when I say some, I’m talking about embracing the truth, embracing reality and trying to make a change. We all know that what happened with George Floyd really helped this country, and indeed the world, look at things differently. I was so pleased to see black, white, young, Hispanic, Italian, everybody out, not just with signs that say Black Lives Matter, but really trying to have a conversation. I want to underscore not just the need for the conversation. What you know, what I love about Pittsburgh is Pittsburgh is a moderate-sized city that has ample old and new money, enough jobs, enough people black and white, if we meet everybody where they are, train them to be what we need them to be.

Pittsburgh could be a model city, in this country. And I’m not just saying that…There’s so much that we can do if we don’t care about who gets the credit, and just do it because it’s appropriate, and the right thing to do. What is wrong with us? Stifling ourselves? And that’s what we’re doing! Is it because I’m black? Is it because I’m a female? Is it because of the rivers and the mountains?...All of these excuses. They’re not excuses anymore. You are making an informed decision not to help Pittsburgh be the best it could be.

And one of the things that we really have to work on now, as we build this new tomorrow is to understand that civic muscle is our fiber. And it is our fiber that we have to use all the time. It’s not just the backbone. So, my metaphor is always that you have to exercise and use muscle. And as we move into this world, we all need technology skills.

And we all need other skills. And we need to recognize and understand though, where black women are for, for instance, in terms of meeting people where they are; it is a digital divide and it is definitely real. And so, if you look at African American women, and you really want to recruit them, we first need to understand the disparities that exist. And those disparities have obstacles and barriers that need to be overcome successfully, such as the children…They have children and so you say, okay, we’re going to offer a course to teach women how to really, really engage in technology and hopefully, get a job that is related. You first need childcare is what I’m trying to say.

And so if you are offering a developmental opportunity, without childcare, without income as their training, I’m telling you right now, you’re going to scratch your head and say, I don’t know whether you are coming to this excellent program. What we have to do is be comprehensive in everything that we do. And, Audrey, when I’m making these statements, it’s amazing to me how generation after generation, people can offer training opportunities, offer educational opportunities, without using common sense, infrastructure and design.  And then wonder why black folks didn’t make it through, you know, enough black women didn’t even apply…What amazes me is how black folks make it because of and in spite of we make it no matter what happens.

Pittsburgh and cities across this country could be awesome and meet all of our employment needs to provide a decent quality of life for family and children, to expose children for them not to think about race in a zip code. Just what is it that you want to be when you grow up? And let me help you get there.