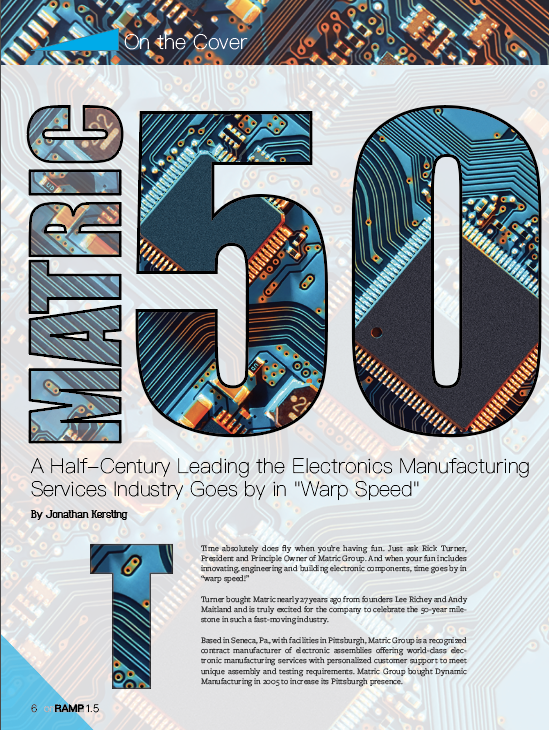 Time absolutely does fly when you’re having fun. Just ask Rick Turner, President and Principle Owner of Matric Group. And when your fun includes innovating, engineering and building electronic components, time goes by in “warp speed!”

Turner bought Matric nearly 27 years ago from founders Lee Richey and Andy Maitland and is truly excited for the company to celebrate the 50-year milestone in such a fast-moving industry.

“We have great people, and we've been able to operate the company profitably,” said Turner. “The electronics industry is changing at light warp speed. And in order to keep pace, we have had to continually reinvest heavily in the business. And we maintain our equipment to the latest state-of-the-art capabilities.”

Matric Group specializes in low-to-high-volume, complex assemblies that other companies are not equipped to handle, explained Turner. Matric Group has fully automatic SMT lines and semi-automatic through-hole equipment combined with its experienced hand assembly team. Services include PCB design and layout, PCB assembly, electromechanical box builds, cable and harness assembly,  and aftermarket services, including repairing and remanufacturing products to extend its lifecycle as well as management of obsolete component inventory. Matric Group’s investment in its engineering prowess has also been key to its success, according to Turner.

“It’s pretty unique to have manufacturing and engineering strengths,” said Turner. “I think that's one of the keys that has enabled us to survive. I like to tell people that we're centrally located smack in the middle of the Silicon Valley of western Pennsylvania. There are many worthy local competitors. In order to do that, I think one of the differentiators that helped us is our engineering capability that our clients can lean on for a variety of needs.”

With the electronics industry changing at Turner’s described “warp speed,” it has created a huge need for customers to update or re-engineer their systems or entire products.

“Many times, our customers wake up, and all of a sudden, the components they designed into their product are no longer available, or they're obsolete. And that's because many times the 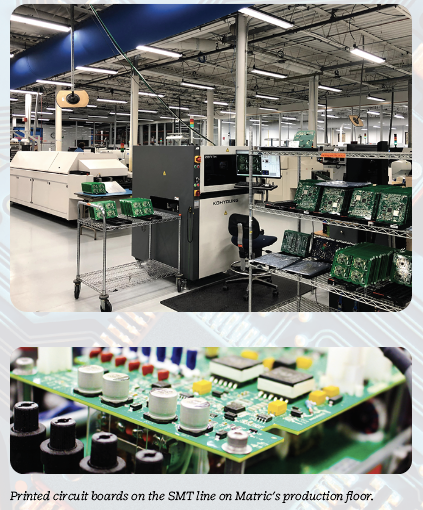 electronic components are driven by the mega users of electronics, cell phones, automobiles, etc.,” said Turner. “And so, our engineering team can help our clients deal with obsolescence problems. We call them, ‘re-spins or redesigns’ to keep their product relevant and current and extend the lifecycle.”

Turner takes pride in Matric Group’s diverse customer base and gets particularly passionate about working with even the most early-stage ideas as they often become some of their most loyal customers.

“We have clients who have come to us with concepts and ideas. Some of them are very well developed and very well defined. And some of them are handed to us on the back of an envelope or a napkin,” said Turner. “In some instances, the customers are pre-revenue. And, as a matter of fact, one of our largest clients in the medical industry started this way with us 23 years ago. They came to us with a concept and a design for a life-saving medical product they were having difficulty with. We helped them building and testing the product through several iterations overseen by the FDA, and it's become an international company that is located in Pittsburgh.”

With around 280 employees spread across three locations, Turner is quick to note that it is the people behind the manufacturing and engineering services that have driven Matric Group’s success over the last 50 years. Turner said one of its employees has been with the company for the entire ride, with several others committing decades of service and expertise to the company. The commitment and determination of Matric Group’s workforce have helped it navigate the COVID-19 Pandemic and many of its entailed supply chain issues. 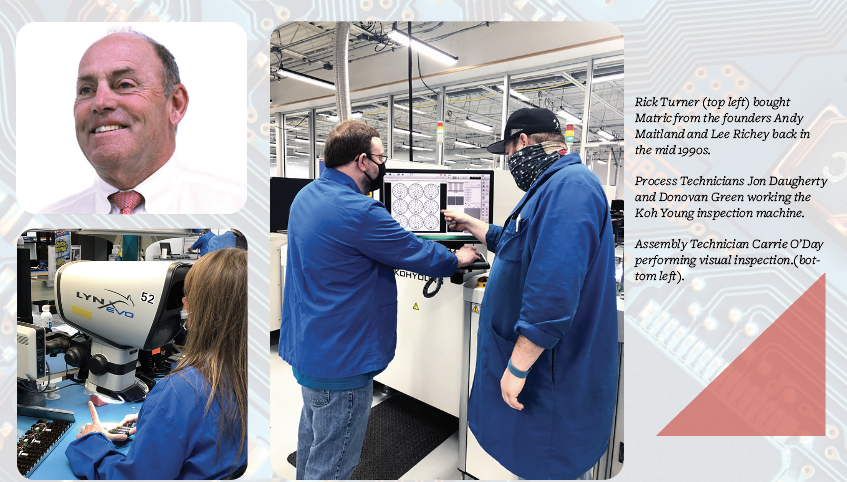 “We were identified as an essential business because of our dissipation in the medical industry. We maintained our operations throughout the last year of COVID. And we feel very fortunate and very blessed that we were able to continue operations; it meant a lot,” said Turner. “We are seeing some constriction in the availability of electronic components. When I say constriction, the availability is not as broad, and the lead times are pushing out…that requires a lot of interaction and management with our clients.”

Turner said Matric Group can find alternative parts or alternative suppliers that keep them going despite tightness in the supply chain right now.

“And we expect, based on what we're seeing, that it is going to impact us probably through the rest of 2021,” said Turner. “It has not stopped us from production because of our engineering team and our ability to find workarounds.”

As the electronics industry continues to move at warp speed, Turner has not forgotten to maintain a close relationship with his workforce.

“I have monthly meetings with the folks at the main plant. We talk about the business, the new customers, the customers that are challenged, and opportunities to up our game. I want to keep everyone interested and involved in what we're trying to do. And that model seems to have worked well. If you told me 27 years ago where we would be now, it would have been beyond my wildest dreams!”

Lee Richey and Andy Maitland started Matric in 1971 with $20 each to buy some business cards for what would start out as a small electronics repair business. They named the company by combining their last names!

From a love of HAM radios to a passion for electronics to a desire to own their own business, Richey and Maitland were both graduates of DeVry Technical Institute, but would not actually meet one another until teaching electronics at a vo-tech school in Oil City, Pa. Both devout Christians, they attributed their meeting to the Lord when their classrooms happened to be right next to each other.

“This is truly a story that could only happen in America,” said Jane Richey, Lee’s wife and Matric’s former Bookkeeper.

Lee and Andy’s repair business started off quickly, designing, manufacturing and selling HAM radio hobby kits. She said their big break came when Joy Mining, a former employer of Lee’s,  asked Matric to design some of its first radio-controlled systems.

By 1980, Matric had 10 employees and was profitable enough to give 10 percent raises all around. Tragedy struck in 1982 when a fire destroyed a production line. Jane noted that no one missed a day of work as the employees helped to finish a facility already under construction and not yet complete.

As mainframes and desktops became prevalent in the mid 1980s, Matric was one of the first companies to have all their desktop computers (with 10 megabyte hard drives) fully networked.

Matric continued to diversify in the 1980s, opening a retail computer store called Computer Showcase. That led to their creating CS Learning Center as a resource to provide computer classes. As the internet came of age, Matric spun-out CS Online as a local internet service provider.

In the early 1990s, sales were around $1.8 million and growing to the next level would require a lot of capital, said Jane. With both Lee and Andy looking to retire, selling Matric to an investor was the most viable option to ensure Matric’s longevity.

“Selling Matric to Rick (Turner) truly helped the company go to the next level,” said Jane. “We are so impressed with what Rick has done! It’s hard to believe that it’s been 50 years since Matric started.”

Windurance -- A New Spin for Matric

In February of 2010, Matric Group and R2J Technologies acquired the interests of MLS Electrosystem to start Windurance.

This technology opens new opportunities for renewables in the marketplace. For example, the Hybrid Power Management System was developed to maximize available power from any and all incoming sources dynamically. Unlike with standard inverters, this can happen with wind turbine, photovoltaic array, generator and battery sources — all at the same time.

Each of these enterprises brought their own credible experience in the areas of sales and marketing (within the gear and motor industry), engineering/R&D (in the servo control industry), and engineering/electronic manufacturing (primarily focused in the industrial electronics and servo control industries) to make Windurance a leader in its market.