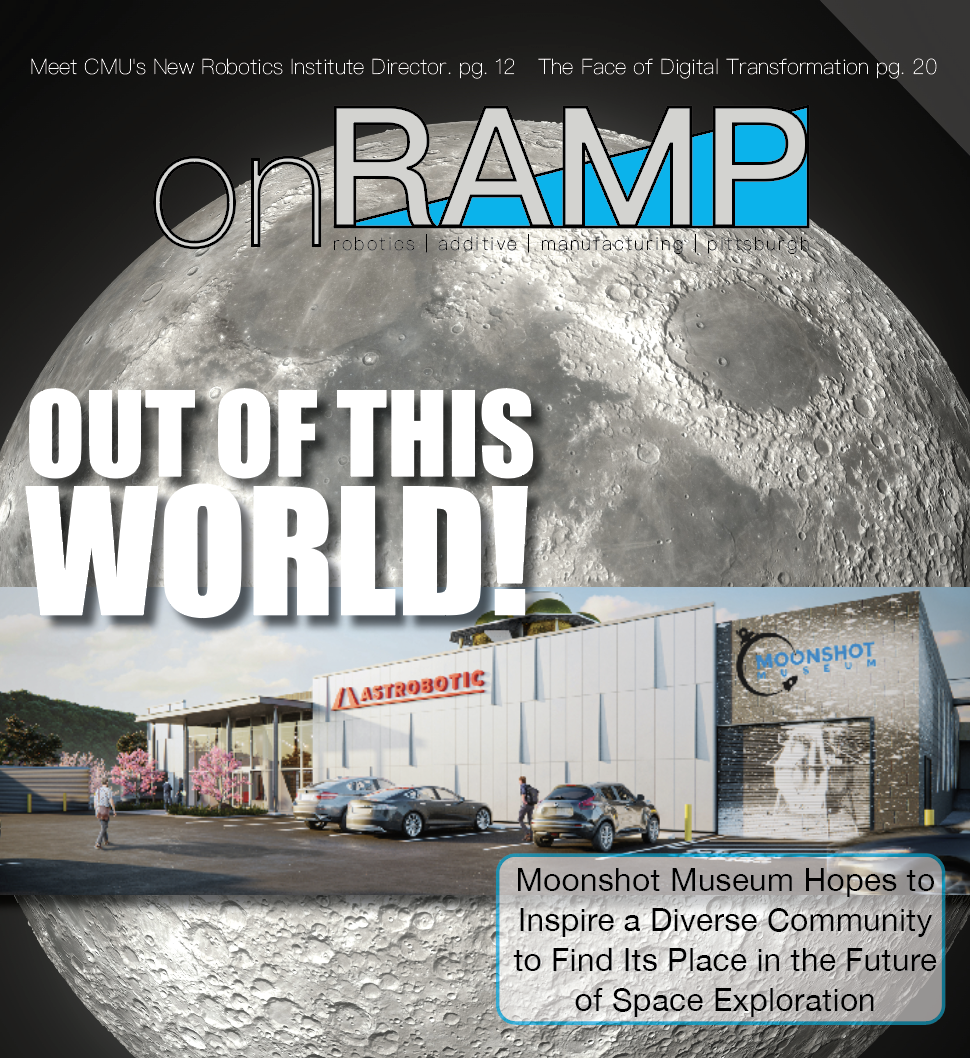 Okay, let’s get all of the clichés and puns out of the way right up front. The forthcoming Moonshot Museum – a collaborative, immersive, experiential resource meant to bring the full dimension of space exploration to people of all ages – will truly be out of this world. A real blast. Worth the weight(lessness). The final frontier. It will send you in to orbit with just “one small step.”

Now that we’ve gotten that out of our system, let’s get this story off the launchpad. (Sorry.)

“When people think of Pittsburgh, they don’t think of space, but they should,” said Moonshot Museum Executive Director Sam Moore. “When you look back at the Apollo moon landings in the late 1960s and early 1970s, you had companies based in Pittsburgh like Rockwell International, Westinghouse, PPG, Alcoa and others playing key roles. We wouldn’t have made it to the moon without Pittsburgh.”

The Moonshot Museum, being constructed now for an opening later this year, will showcase locally based space technology company Astrobotic’s operations on the North Side. The museum is being built as an appendage to the Astrobotic building and for a very intentional purpose – to provide visitors with a first-hand, real-time view of space-based research and development while it is being performed.

“Astrobotic was founded 15 years ago and has seen significant growth driven by hundreds of millions of dollars in NASA and commercial contracts over the past two years. Today they employ more than 160 people,” said Moore. “We want to pull back the curtain in an unprecedented way. There is no other place in the world where you will be able to see real lunar equipment and researchers at work.”

The Moonshot Museum hopes to inspire a diverse community to find its place in the future of human space exploration through innovative exhibitions and programs fueled by science, technology, engineering and the arts. That’s because of a simple truth – it will require people of all backgrounds and interests to drive innovation and explore space.

“We want to demystify space without lessening the scope of what it takes to explore,” Moore added. “If you had asked me at age 12 if I thought I could work in the space industry 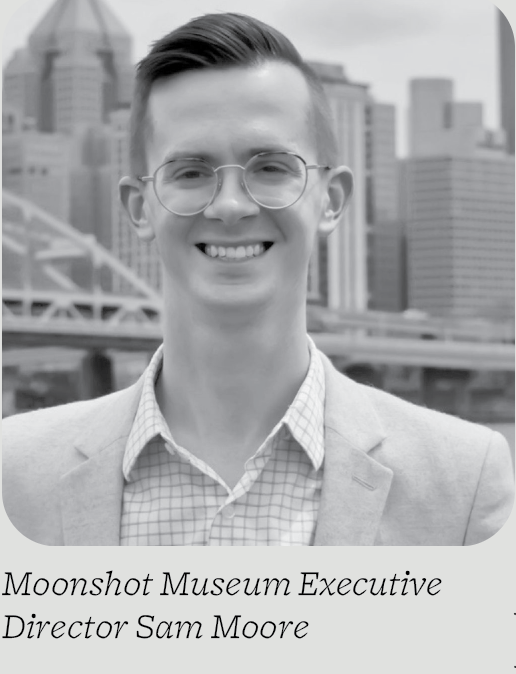 as an adult, I would have immediately said no because I was never very good at math. But it takes more areas of expertise than math to support a robust space industry.  It needs marketing people, HR experts, attorneys, designers, artists, HVAC and other tradespeople.

“Our goal is to focus on young people – it’s our commitment to bring them here, let them see the opportunities for their lives and careers,” he said. “This will be the only museum focused on the professional preparation needed for the space industry.”

Moonshot Museum is still under construction, but designs can be seen online via a walk-through video showing the insider’s view of the space industry through floor-to-ceiling windows into Astrobotic’s Clean Room spacecraft workshop. Visitors will see lunar landers and rovers under construction before they begin their journey to the moon’s surface.  Also on display will be actual lunar spacecraft as they’re being built by space industry professionals.

A Moonshot Theater will provide a deep dive into the $450 billion global space industry, the incredible opportunities space offers humanity, and how space can help solve major issues on earth.

“One of the missions visitors can become immersed in, Lunar Settlers, will lead them through the process of setting up the first human settlement on the moon – along with all of the technical, practical, social, governmental and interpersonal challenges that involves. They can even experience the artistic side of the space industry by designing a unique mission patch and advertising campaign.”

The Moonshot Museum aims to draw visitors from its Manchester neighborhood, which has five schools within walking distance. But like the industry it champions, its sights extend far beyond those modest boundaries.

“We have 3,000 square feet to work with here, and Moonshot Museum is using every corner of that space to make this museum an experience that visitors can get nowhere else, and that they will remember for a long time,” Moore explained. “Rather than simply displaying artifacts in a didactic way, as most museums do, we are building a much more immersive experience against the backdrop of Astrobotic’s work.

“The challenge we have taken on is nothing less than having visitors experience a lunar mission and realize that they can play an active part,” he said. “It will be an entirely different experience each time you visit.”

This again connects back to Pittsburgh’s role in space exploration all along.

“If you took the economic region of western Pennsylvania, eastern Ohio and northern West Virginia, you would see that this is the third-biggest region supporting the space industry in the United States,” said Moore. “That’s something to be proud of and to make people aware of. When
Astrobotic selected the site in Manchester, the idea was to put Pittsburgh on the map for space research and talent.

“Starting in this neighborhood, how can we be as accessible to local visitors? But the idea is to attract attention from visitors across the country and around the world, as the reputation of Pittsburgh as a center of innovation and ideas in the service of the space industry grows.”

“Space is more than just rocket science,” said John Thornton, Astrobotic CEO and Chair of the Moonshot Museum’s Board of Directors. “We want to provide the ‘spark’ – that moment when an individual is inspired to pursue a space or tech career who may not have otherwise done so. For Astrobotic, success is as much about execution of its other-worldly missions and business as it is about engaging with and serving the communities it is a part of.”

“When you mention space, people think of different things. Whether it’s stars, planets, astronauts, or engineers, a common theme is the persistence of curiosity. Curiosity is a spark that can either catch fire or fizzle out – and we want it to catch,” Moore said. “Fostering confidence for those traditionally under-represented in STEAM is of vital importance.” 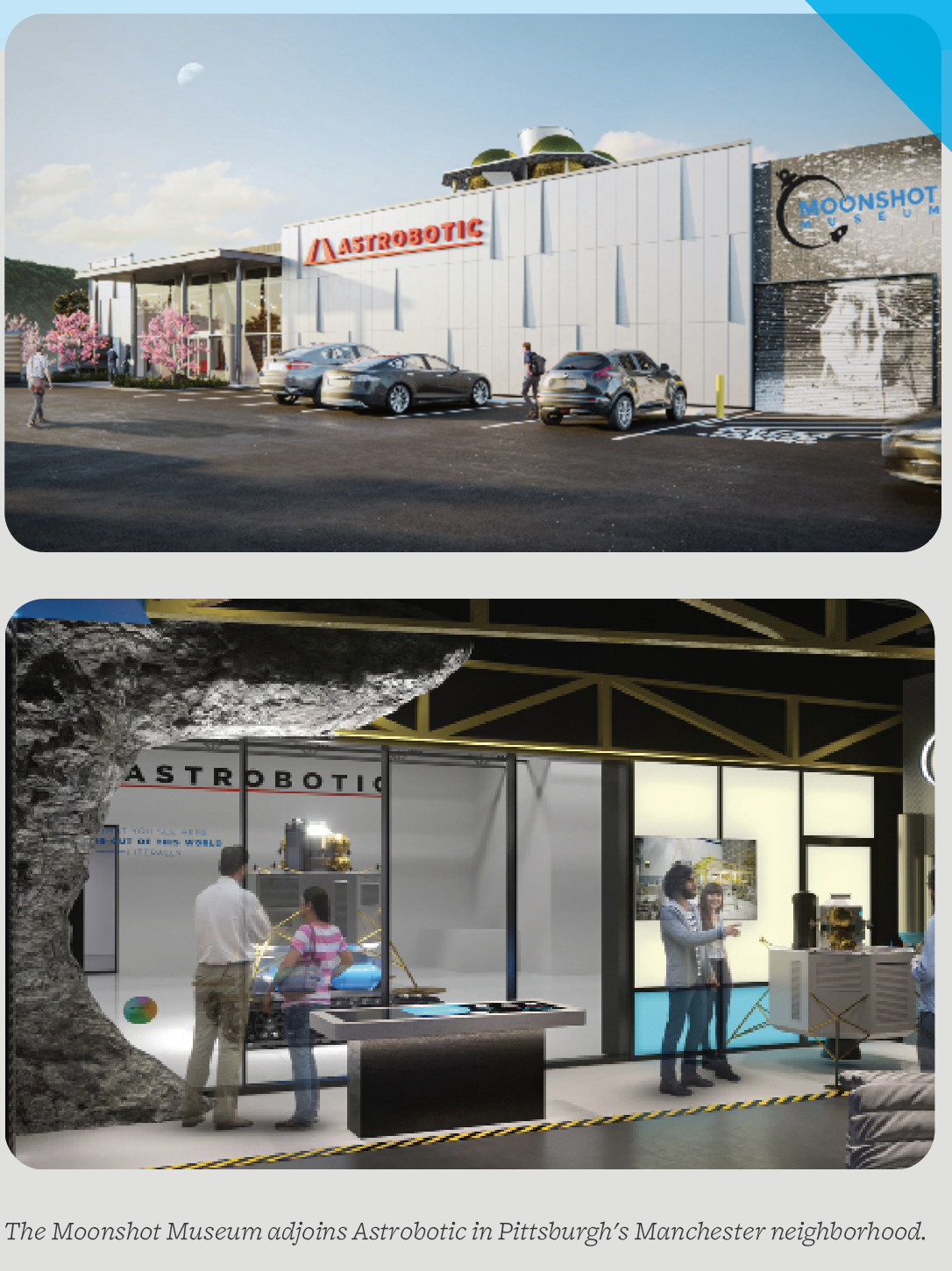 And why does all of this emphasis on space exploration and lunar landings deserve such attention today? Because the practical business of space has fundamentally changed in the past five years.

NASA had led the way into space, starting with the Eisenhower and Kennedy administrations, reaching its pinnacle with the Apollo 11 landing and the first steps by human beings on the moon in 1969.  The federal agency continued its lunar missions, followed by the International Space Station and Space Shuttle flights, until the Challenger tragedy in 1986. NASA’s work has continued since then, but with not perhaps as much attention-getting flair.

“The Webb telescope went up without a hitch, and NASA continues to focus on pushing boundaries, applying instructive science, but it has stepped back from the practical business of actually getting into space,” Moore said. “NASA has outsourced several missions to private contractors like Astrobotic, United Launch Alliance (ULA) and Space X, for much lower cost than a launch completely administered by NASA would be.

“Astrobotic does a lot of work related to the logistics of getting to the moon’s surface,” he said. “NASA concentrates on equipment and research to be placed on the moon, but is letting private companies actually handle getting there. It’s like hiring an Uber or a UPS delivery, but to get to the moon. The paradigm has certainly shifted.”

Back to the Moonshot Museum, one of those packages delivered to the moon could include a personal message from museum visitors. A memory, a dream for the future, a personal mission plan or just a heartfelt wish for peace in the galaxy could be sent to the moon’s surface onboard one of Astrobotic’s lunar landers. That’s a personal connection to that orbiting sphere in the sky that cannot be offered by any other facility. And it can be found in Pittsburgh, one of the world’s leading lunar lights.

“Space promises to become a $1 trillion industry by the end of this decade,” Moore concluded. “Pittsburgh is still leading the way. With the Astrobotic facility here and the Moonshot Museum soon to be opened, the world will discover that Pittsburgh is the place for space.”