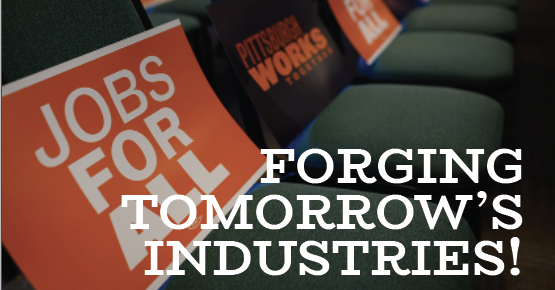 At least that’s what the people behind Pittsburgh Works know to be true, and are working in tandem with area business, civic and labor leaders to prove to the world. Joe Magarac had been a famous folk hero, celebrated by mostly Eastern European steelworkers in the Pittsburgh region a century ago. A giant steelworker, Joe had tremendous physical power to match his bravery, generosity and dedication to providing a solid day’s work in the tough environment of heavy manufacturing.

The trade laborers of today sport all of those same qualities, and it’s high time they got a seat at the table to help lift up and expand the regional economy of the 21st Century.  Pittsburgh Works, by including the building trades in its economic development efforts, wants to create an inclusive vision of economic progress that embraces and respects both traditional legacy industries and emerging ones, while honoring the diversity of cultures and traditions inherent to each, and ensuring a sustainable environment.

“We want to build a Pittsburgh and a region in which the lines between the ‘old’ and ‘new’ economy are erased and value is placed in the work ethic here and the dedication to community, while building a future for all,” said Morgan O’Brien, Co-Chair of the Pittsburgh Works board. “We’re recognizing and capitalizing on a confluence of interests, bringing the labor movement into a shared program with management. This has evolved from the history of this region, working from a set of shared values. Built on valuing both people and our environment.” 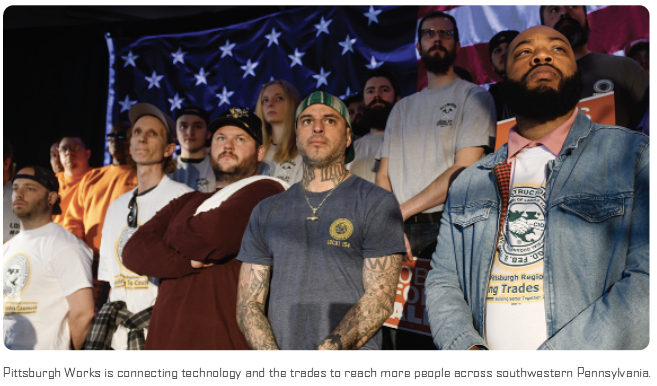 If the idea of bringing together various constituencies with a common goal of regional economic prosperity sounds familiar, that’s because it is. But Pittsburgh Works came together with its own cast of participants because it felt something had been lacking among the existing organizations.

“Everyone loves to talk about technology and education driving this region, but our economic future can be more than just those two aspects of our region,” O’Brien explained. “We believe that the existing agendas weren’t broad enough to capture all of our region’s strengths. A true renaissance is much more than just driverless cars. A deeper resurgence is possible by recognizing that energy feeds manufacturing, engineering, the labor market and more.”

A diverse economy that includes traditional industry alongside emerging technology companies is the surest path to sustainable prosperity for everyone, the group advocates. Products need to be manufactured in America, to reflect our values and place a premium on quality while protecting and valuing workers and the environment. Supporting and growing the domestic manufacturing capacity can also be seen as a matter of national security, economic vibrancy, sustainable employment and environmental stewardship, according to the Pittsburgh Works approach, which aims to position the Pittsburgh region squarely at the epicenter of this movement.

The natural resources and goods produced in this region have had a positive impact on the local quality of life, yielding good-paying jobs created by industry and manufacturing that can lift families up, promote prosperity and raise the standard of living.

“We believe we’ve put together a powerful group focused on economic issues, including corporate and community leaders, union leaders and all of their members,” O’Brien said.  “Maintaining a good environment and pursuing economic development can both exist.  We plan to become a public policy influence, pushing back against extreme positions to get to a place where our regional strategy touches all of our strengths and opportunities.  We’re challenging Pittsburgh to seize this opportunity.”

“Its agenda becomes more urgent by the day,” said O’Brien, “because by comparison, a supply chain that relies on foreign competitors, including those countries that lack a commitment to protecting the environment while denying workers their basic rights and opportunities, can result in continued job loss, further economic uncertainty and harm to our shared environment. The Pittsburgh region can lead the country by displaying smart, nimble, strategic, and above all, bold actions now.”

As such, the Pittsburgh Works agenda includes these main objectives:

“Promoting the traditional industries of the region – manufacturing, energy, construction and transportation – is the path to future growth,” said Jeff Nobers, Pittsburgh Works Executive Director. “Saying old-line industries have to go is a faulty assumption.  Technology, healthcare, academia – these are important sectors, but a large metro area like Pittsburgh needs more than these to sustain widespread job growth and economic vitality.  The steel collapse proved this, then the Marcellus Shale discovery accelerated our recovery.

“When the pandemic happened, problems in the national supply chains were exposed, causing dramatic disruptions,” Nobers continued. “The most vibrant nation on earth should not have to worry about that. Concerns like that are folded into our mission.

“We want to promote the advantages of this region, like plentiful energy, a skilled and dedicated workforce, a workable infrastructure and great geographic positioning,” he said.  “Compared with New York, Los Angeles and Chicago, companies are looking for less crowded, mid-sized locations, but we didn’t see anybody take the reins. When political leadership says we don’t want the petrochemical or shale industries coming here, or those jobs, that’s counterproductive. Those industries are a large part of the local economy.”

Then there’s the labor factor – the connective tissue binding the strategies and tactics of comprehensive regional economic development. And a core element of the Pittsburgh Works approach.

“We’ve heard a lot of organizations talk about infrastructure and manufacturing,” said Tom Melcher of the Pittsburgh Building Trades Union. “Our question was: How can we do this better, how can we make something happen?  We represent 60,000 people who want to bring manufacturing back to the U.S. and to western Pennsylvania,” he said. “It’s amazing how many big corporations are on board with us and who agree.

“Yes, robotics are great, but somebody has to build and maintain them – that’s our building trades,” he continued. “Talk is cheap. Were in this for our survival. We’re being realistic and responsible. The Shell cracker plant, for example, is attracting new industries and jobs for the region. That’s a good thing.  We are the number one producer of energy in the world, right here in western Pennsylvania. If we do this right, the potential is huge.”

Pennsylvania is indeed an energy state, and Pittsburgh sits in the epicenter of an energy economy that has created thousands of jobs and billions of dollars in commerce in an area that 30 years ago struggled with high unemployment. The natural gas industry, coupled with a rise in non-carbon energy efforts, supports the idea of an all-inclusive menu of energy options to fuel growth, power factories, light and warm homes and produce thousands of goods and services.

“A strong central functioning economy is possible here,” said Nobers. “You can build a solid career here with or without a college degree. If you want to get closer to achieving true economic and social justice, creating these jobs is the way to do it.

“This region offers long-term benefits to industries locating or expanding here,” Melcher added. “We have the skillset and manpower. We can handle any jobs that come our way.  Our apprenticeship programs are going very well. We’re filling gaps with more young people. I go to high schools to talk about alternatives to going to college, and I am shocked at how much movement is going toward the building trades. Hundreds are applying for jobs. People are realizing that you can make a great living working in the trades. It’s a brotherhood and sisterhood. That’s the key to it all.”

“We want to help create a thriving middle class here again,” O’Brien concluded. “Let’s get to work and build it here. This is a non-partisan issue. It’s not red and blue – it’s black and gold.”