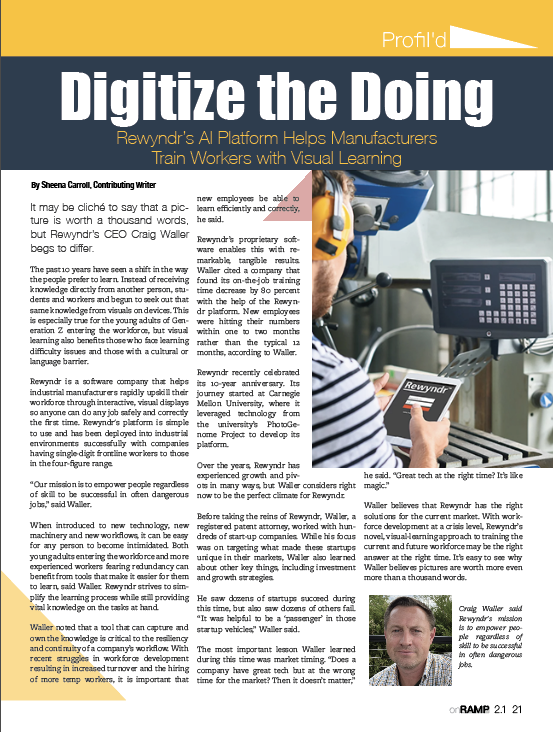 It may be cliché to say that a picture is worth a thousand words, but Rewyndr’s CEO Craig Waller begs to differ.

The past 10 years have seen a shift in the way the people prefer to learn. Instead of receiving knowledge directly from another person, students and workers and begun to seek out that same knowledge from visuals on devices. This is especially true for the young adults of Generation Z entering the workforce, but visual learning also benefits those who face learning difficulty issues and those with a cultural or language barrier.

Rewyndr is a software company that helps industrial manufacturers rapidly upskill their workforce through interactive, visual displays so anyone can do any job safely and correctly the first time. Rewyndr's platform is simple to use and has been deployed into industrial environments successfully with companies having single-digit frontline workers to those in the four-figure range.

“Our mission is to empower people regardless of skill to be successful in often dangerous jobs,” said Waller.

When introduced to new technology, new machinery and new workflows, it can be easy for any person to become intimidated. Both young adults entering the workforce and more experienced workers fearing redundancy can benefit from tools that make it easier for them to learn, said Waller. Rewyndr strives to simplify the learning process while still providing vital knowledge on the tasks at hand.

Waller noted that a tool that can capture and own the knowledge is critical to the resiliency and continuity of a company’s workflow. With recent struggles in workforce development
resulting in increased turnover and the hiring of more temp workers, it is important that new employees be able to learn efficiently and correctly, he said.

“Our mission is to empower people regardless of skill to be successful in often dangerous jobs,” said Waller.

Rewyndr’s proprietary software enables this with remarkable, tangible results. Waller cited a company that found its on-the-job training time decrease by 80 percent with the help of the Rewyndr platform. New employees were hitting their numbers within one to two months rather than the typical 12 months, according to Waller.

Rewyndr recently celebrated its 10-year anniversary. Its journey started at Carnegie Mellon University, where it leveraged technology from the university’s PhotoGenome Project to develop its platform.

Over the years, Rewyndr has experienced growth and pivots in many ways, but Waller considers right now to be the perfect climate for Rewyndr.

Before taking the reins of Rewyndr, Waller, a registered patent attorney, worked with hundreds of start-up companies. While his focus was on targeting what made these startups unique in their markets, Waller also learned about other key things, including investment and growth strategies.

He saw dozens of startups succeed during this time, but also saw dozens of others fail. “It was helpful to be a ‘passenger’ in those startup vehicles,” Waller said.

The most important lesson Waller learned during this time was market timing. “Does a company have great tech but at the wrong time for the market? Then it doesn’t matter,” he said. “Great tech at the right time? It’s like magic.”

Waller believes that Rewyndr has the right solutions for the current market. With workforce development at a crisis level, Rewyndr’s novel, visual-learning approach to training the current and future workforce may be the right answer at the right time. It’s easy to see why Waller believes pictures are worth more even more than a thousand words.