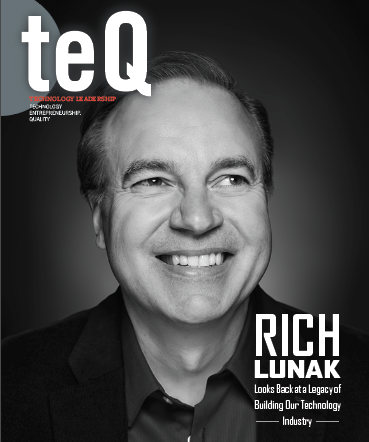 If Pittsburgh’s tech industry had its own Pantheon or Hall of Fame honoring the people who worked tirelessly to make it what it is today, Rich Lunak, President and CEO of Innovation Works (IW), would have a prime seat with all of the trimmings.

As a technologist, entrepreneur, business leader and investor, Lunak has been at every side of the technology company creation/innovation table over the last 30 years. In short, he’s a legend around here.

Prior to joining Innovation Works, Lunak was a successful technology entrepreneur/inventor who built Automated Healthcare, one of Pittsburgh’s most successful and enduring technology startups. He helped lead it from a three-person startup to an acquisition by McKesson Corporation where he became the architect of several disruptive growth strategies that helped McKesson launch businesses that became market leaders in multiple segments.

At the helm of IW, one of the nation’s most active early-stage investors, Lunak synthesized his decades of experience to lead the organization’s efforts to provide business expertise, seed capital and other resources to high-potential, technology start-up companies in Pittsburgh.

Lunak announced his retirement from IW this spring, easily punching his ticket to the mythical Pittsburgh Tech Pantheon/Hall of Fame. The Pittsburgh Technology Council, TEQ Magazine and I can’t just let Lunak ride off into the sunset toward those imaginary shiny marbled halls without some sort of an exit interview!

I had to ask Lunak a few questions. Pick his brain on where our tech industry is heading. We had to know what he’s proud of and if he has any advice for his yet-to-be-named successor.

I’m a sucker for a startup story. So just what was the inspiration for starting Automated Healthcare?

“So, we always thought it was tragic that you could go into a 7Eleven and buy a can of Pepsi, and there was a barcode scan at the checkout counter to make sure they were charging you the right price,” said Lunak. “And yet in a hospital environment, they might be dispensing 3,000 plus different medications to patients. And that same bedside scan wasn’t available to make sure you are giving the right patient the right drug at the right time. So, the idea behind the company was not only to make sure that we were dispensing the correct medications with robotics, but to attach barcodes to automatically identify them and then automate the entire medication use process, including bedside administration.”

It’s pretty cool to note that not long after Automated Healthcare hit its stride in the marketplace, the Department of Health and Human Services announced a federal standard to barcode all medications.

After McKesson bought Automated Healthcare in 1996, Lunak stayed on to become the youngest executive on McKesson’s Corporate Operating Team. Lunak led five autonomous business units that served more than 13,000 customers, generated hundreds-of-million in revenues and managed more than 1,800 employees with operations in four states. He was responsible for all aspects of the businesses, including acquisitions, sales, marketing, R&D, manufacturing and service. Under Lunak’s leadership, McKesson Automation developed breakthrough products that are installed in leading health care providers around the world. A pretty hefty gig for sure. So why change gears and pursue the opportunity at IW?

“Fast forward to today, and we were just looking at the data for the last year. We had just under $3.6 billion invested into the tech sector and startup companies in 2021 alone. It’s quite the difference. And we had quite a few IPOs last year. And so, we’ve made a lot of progress. Still, there’s always this imbalance between supply and demand. And I think that even exists in Seattle or Silicon Valley or Boston or New York or some major hubs, but I think Pittsburgh is on a really, really good trajectory.”

“McKesson started to go through a reorg…I started to focus more on corporate issues and got away from the innovation technology and customers that I loved. And so, when I was contacted to consider Innovation Works at the time, I thought, ‘You know, I’m managing just under 2,000 people and millions of dollars. Why would I do that?’” said Lunak. “And then I thought about it like, I’m not having fun, and it’s no longer my company, right? It’s somebody else’s. And I wanted to get away from that. And Innovation Works seemed like just right at the sort of focal point of a lot of the tech and startup activity here.”

Besides, Lunak had a soft spot in his heart for IW. Innovation Works’ predecessor program, known as the Ben Franklin Technology Partners, gave Automated Healthcare its start back in the day with a $90K grant to buy an off-the-shelf robot arm to build its first prototype. Kind of cool to take your career full circle and give other innovators their first crack at the bat.

“And by the way, I love telling entrepreneurs this, we were turned down on more than one occasion initially, so I’ve been on both sides of the table,” said Lunak.

So stepping into a new environment had to be pretty intimidating. Going from 1,800 reports to a small team. Talk about a culture shift. I had to ask Lunak how he adjusted to it all.

“So I sort of had a game plan of coming into a new business and getting my sea legs, trying to understand what the issues were and putting a strategy in place. I spent probably the first 120 days or so going around talking to entrepreneurs and stakeholders sort of assessing what I thought the organization was doing well, what we should change and put in a game plan,” recalled Lunak. “I generally built a new team to create the dynamism and expertise needed… it’s been really gratifying to have a front row seat to the last 17 or so years in tech. I think back to 2005. And there was some cool stuff kind of going on, but not like it is today.”

So how has the tech ecosystem in Pittsburgh changed in the last nearly two decades?

“You know, back, say in the mid 1990s, when we were building and selling our business, there were literally only a handful of tech companies anybody would even know today like FORE Systems or FreeMarkets Online. If you go back and look at the data, we were very, very low on the national list in terms of entrepreneurial activity back then. It literally was maybe $15-20 million invested in Pittsburgh companies on an annual basis. We were behind regions like Hartford, Conn., or Rochester, N.Y.,” said Lunak.

“Fast forward to today, and we were just looking at the data for the last year. We had just under $3.6 billion invested into the tech sector and startup companies in 2021 alone. It’s quite the difference. And we had quite a few IPOs last year. And so, we’ve made a lot of progress. Still, there’s always this imbalance between supply and demand. And I think that even exists in Seattle or Silicon Valley or Boston or New York or some major hubs, but I think Pittsburgh is on a really, really good trajectory.”

“I couldn’t agree more, I think we ought to be the best Pittsburgh can be. What’s sort of been fun is I think the conversation went from early in my career, you know, people were always trying to compare us or trying to aspire to be another place. And today we’re unabashedly proud of Pittsburgh. Pittsburgh is a great place to be and it’s unique. It’s got an authenticity to it, and just an incredible vibe. It may not be the biggest hub. But one thing about Pittsburgh is that you can almost network to anybody in this tech ecosystem that you want to. And we have that Midwestern sensibility among Pittsburghers where they’re not afraid to drop what they’re doing and help and meet with people. There’s rarely somebody we introduce a company to that won’t take that meeting.”

It’s apparent that Lunak’s had a ton of fun over the past 17 years. He’s played an active role providing blasts of oxygen on startups’ innovation fires and then connecting them to more oxygen to make that fire bigger. I like to say so many IW portfolio companies employ a lot of people and pay a lot of taxes!

“That’s true. I think it’s a program that pays for itself. When we actually look at the data across the Ben Franklin network, literally for every state dollar that goes into the program, the state garners close to $4 in direct taxes back…I think it’s served the Commonwealth really well. I know, I’ve benefited from it firsthand and seen it. It’s a system that works,” said Lunak.

“And if we could put more into it, that’d be awesome. At the end of the day, I think, so much good is coming out of this. And then it’s creating more wealth for people who are becoming angels. I tell people Automated Healthcare wouldn’t be a business in Pittsburgh today without those early dollars to build that first prototype. And when I left that company, just the Automated Healthcare business, not other units of McKesson, we had over $75 million a year in payroll. Once again, a lot of taxes being paid!”

“I couldn’t agree more, I think we ought to be the best Pittsburgh can be. What’s sort of been fun is I think the conversation went from early in my career, you know, people were always trying to compare us or trying to aspire to be another place."

As of writing this in April 2022, the search was still well underway for Lunak’s successor. Whoever that may be, there are some sizable shoes to fill. I had to ask if he had any advice for the new leader?

“I think the first set of advice I would give that new person is ironically, the same advice I give to an entrepreneur. Take care of your customers. First and foremost. In our case, that customer is the entrepreneur, the innovator, the founders. And, you know, if you do a good job taking care of them…there are going to be good outcomes,” said Lunak.

You can’t have the proverbial exit interview without asking about accomplishments. Lunak has never been one to shine his own stars, but I had to ask. C’mon Rich, we all know that you and your team have done some great work over the years!

“Well, I mean, certainly with Automated Healthcare it’s the whole patient safety impact on the health care industry.  But for Innovation Works, I don’t know that there’s any one single thing. I would say that I’m most proud of bringing a culture of innovation to the organization. You know, we advise entrepreneurs day in and day out to be innovative and agile and dynamic, and I think we’ve been that as an organization.”

So is Lunak really retiring? Really? He can’t just go away completely, can he? So, what are Lunak’s plans exactly?

“My intent is really to retire. I’m certainly going to continue to do work on boards. And both for profit and nonprofit, and I have been asked to consider teaching a class at a local university,” said Lunak. “I’ve been a cofounder, entrepreneur, or CEO for the last 30 plus years and you make a lot of sacrifices doing that. And I am really looking forward to spending more time with family and friends. I’d like to travel, and hopefully start reading through that stack of books.”

For sure, if Pittsburgh ever gets that massive Technology Pantheon built, there will be a fantastic seat for Lunak. I hear it’s a great place to catch up on some reading. And maybe inspire the next generation of tech entrepreneurs.  ;-)

Listen for More with Rich