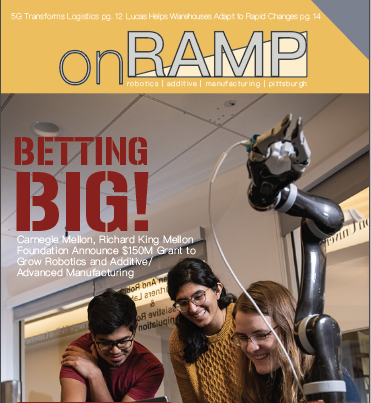 A legacy of heavy manufacturing and university-fed technology innovation have created a taut canvas to paint an economic renaissance for the Pittsburgh region. As a recognized center of excellence in robotics, automation and additive manufacturing, Pittsburgh has been making the bold brush strokes creating a new economy.

This spring, Carnegie Mellon University (CMU) and the Richard King Mellon Foundation, put more paint on Pittsburgh’s palette announcing a $150 million investment to grow science, technology and manufacturing across the region. The first $75 million of the largest single grant in the RK Mellon Foundation’s 74-year history is the lead gift for a new cutting-edge science building on the CMU campus in the Oakland neighborhood of Pittsburgh. The second $75 million will seed a new robotics innovation center and an institute focused on advanced materials and manufacturing at Hazelwood Green — a former riverside steel mill site.

“Pittsburgh’s future — and the future of U.S. innovation and global competitiveness — are inextricably linked to scientific and technological advances, and how well organizations, communities and industries can stay ahead of the rapid pace of change. Carnegie Mellon is positioned at the forefront of science and innovation’s great promise, and this visionary grant will fuel the research and activities that will build this exciting future,” said Farnam Jahanian, CMU President.

“This historic investment will help Pittsburgh to control its economic destiny and to reassert its rightful place as the national leader in the most important industries of today and tomorrow, with access to everyone who wants to be part of the story,” said Sam Reiman, Director of the Richard King Mellon Foundation. “The Hazelwood community has been waiting for more than 18 years, since the J&L mill closed, for the site to become a source of jobs once again… This is the first of many steps to achieve our vision of making Pittsburgh a global leader in advanced and additive manufacturing, robotics and the creation of technology jobs that are accessible to the entire community.” 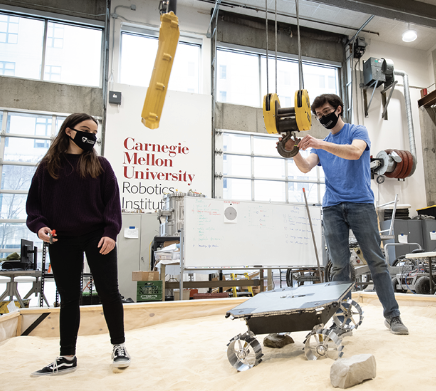 According to Reiman, this latest chapter in the decades-long relationship with CMU represents a significant acceleration of activity in three fields that have been the key to Pittsburgh’s 21st century renaissance and are central to university’s future — the sciences, advanced manufacturing and robotics. He continued that these three initiatives will fuel cross-disciplinary entrepreneurial ecosystems for research and innovation that will spark discoveries, transform industries, attract businesses to the region and support the creation of high-tech jobs and startup companies — with training and education opportunities for people in the community.

A New Home for Science at CMU

The world is at the cusp of a revolution in science. Research increasingly requires scientists to work across disciplines, technologies are generating massive amounts of data, artificial intelligence is reshaping the scientific process, and a new kind of laboratory equipped with automated equipment and machine learning is allowing researchers to address modern challenges in new ways. All of these are rapidly changing the methods and pace of scientific discovery, allowing research teams to understand more deeply the fundamentals of our universe and solve increasingly complex global problems.

CMU has launched a decade-long comprehensive future of science initiative to embrace these new paradigms and accelerate the university’s leadership in scientific discovery, including investments in recruiting and retaining faculty, and developing state-of-the-art research and education infrastructure. The cornerstone of this initiative will be a new, $210 million science building on its Pittsburgh campus, which is made possible with the Richard King Mellon Foundation’s $75 million lead grant. The facility will facilitate collaborative research and education spanning multiple fields across the university.

Reiman said the facility will be designed for open collaboration and to inspire unanticipated intersections of ideas. In addition to classrooms, teaching labs and other spaces, student and faculty researchers will have access to modern labs that are purposefully designed to be shared. The building will complement the university’s simultaneous
$40 million investment in the nation's first academic cloud laboratory that will feature highly automated, remote-controlled robotic instruments for experimentation and data collection.

The future of science initiative advances CMU’s commitment to seeding and developing interdisciplinary areas of scientific inquiry, such as neuroscience, life science, materials science, computational biology, cosmology and sustainability, according to Jahanian. In addition to these new state-of-the-art facilities, the initiative is expected to raise additional philanthropic support for endowed professorships, graduate fellowships, undergraduate scholarships and research seed funds. 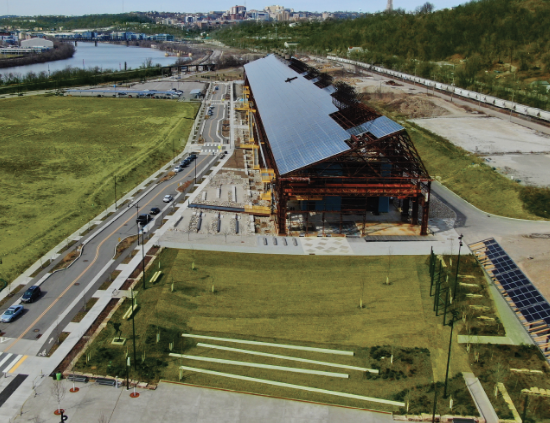 The RK Mellon Foundation is partnering with The Heinz Endowments and the Claude Worthington Benedum Foundation — a partnership known as Almono, the name reflecting Pittsburgh’s three rivers — on the long-term redevelopment of Hazelwood Green, the site of a former steel mill that is being transformed into a center for innovation and economic development. The vision for the site is inclusive of the local community, with a focus on sustainability, equity and inclusive economic opportunity. In 2019, $20 million in funding from the RK Mellon Foundation propelled CMU’s Manufacturing Futures Initiative and the Advanced Robotics for Manufacturing Institute became the first tenants at the site’s iconic Mill 19, a high-tech building built within the shell of the defunct mill.

Hazelwood Green has been a vital component of Carnegie Mellon’s continued leadership in advanced and additive manufacturing. The university will build on this foundation to synergistically expand the ecosystem there through two significant projects focused on translational research: the expansion of CMU’s groundbreaking research in the digital transformation of manufacturing through the Manufacturing Futures Institute, and the construction of a new Robotics Innovation Center.

Over the next 10 years, robotics, artificial intelligence and advanced materials and manufacturing are forecast to grow at double-digit rates, said Reiman and their total market size will likely exceed $2 trillion by 2030. It is hoped that leveraging Hazelwood Green as the new hub for these technologies will link economic development in Pittsburgh to the rapid growth of these areas. In addition to generating new momentum for the university’s industry partnerships, these initiatives will attract future research facilities and additional resources for community initiative.

“Hazelwood Green and Mill 19 are proven environments to support the collaboration we know is needed to stimulate a wellspring of next-generation engineering technologies and entrepreneurship in manufacturing,” said William Sanders, the Dr. William D. and Nancy W. Strecker Dean of the College of Engineering. “This next chapter of our partnership at Hazelwood Green has the potential for exponential growth as we secure a leading role for Pittsburgh and the United States in the future of manufacturing and robotics.”

Since 1979, CMU researchers have regularly developed robotics breakthroughs, from robots that perform critical tasks in the harshest conditions on earth to assistive technologies that enhance the daily lives of differently abled people to advanced visualization and perception systems that will be key for the safety and reliability of autonomous vehicles.

Over the past 10 years alone, robotics research expenditures at CMU have nearly doubled, and are expected to double again over the next decade, said Jahanian. The $45 million lead grant from the RK Mellon Foundation will enable CMU to further expand its robotics research capacity with a new facility, the Robotics Innovation Center (RIC), at
Hazelwood Green.

The RIC, which is estimated to cost more than $90 million and will add up to 150,000 square feet of space to CMU’s robotic research capabilities to complement and accelerate work at the nearby Manufacturing Futures Institute at Mill 19. As a new translational research
facility, the RIC will also complement the work of CMU’s National Robotics Engineering Center (NREC).

The new facility will provide CMU robotics researchers with spaces that will allow them to bridge the stages of foundational research, integration, iteration and commercialization to ensure discoveries can be translated into
real-world technologies.

“The technologies developed at the Robotics Innovation Center will ripple across every part of our society and economy, impacting fields including health care, transportation, national security, education, agriculture and retail,” said Martial Hebert, dean of the School of Computer Science. “Through the RIC, the Manufacturing Futures Institute, and the Advanced Robotics for Manufacturing Institute, our Hazelwood Green hub will cement its reputation as a key location for technology innovation — attracting talent, partnerships, companies and investment that further build momentum for the region and industry.”

The RK Mellon Foundation’s $30 million commitment in advanced and additive manufacturing at CMU builds on its previous philanthropic support in this area and allows the university to expand its work through the Manufacturing Futures Institute (MFI). As an institute, MFI will be a permanent organization with the long-term vision and funding to address the complex challenges facing U.S. and global manufacturing and to enhance economic development. Half of the grant will create an endowment to sustain the MFI in perpetuity.

MFI plans to develop state-of-the-art advanced materials and manufacturing equipment and processes, such as additive manufacturing; build collaborations between CMU researchers, industry and government organizations; fuel entrepreneurship through startups and spinoff companies; strengthen the ecosystem for technology transfer to industry partners; and expand high-tech workforce training for the Pittsburgh region’s residents. MFI will intentionally partner not just with large manufacturing corporations, but also small and medium-sized regional businesses. CMU expects the institute will catalyze more than $200 million in research activities in the coming decade.

“We know that industrial cities and their workers in the U.S. have been greatly affected by the downturn of jobs in manufacturing since their peak in 1979. But we’ve seen how the ingenuity created by corporate, government, nonprofit and university partnerships in Pittsburgh has begun to make a profound positive impact,” said Gary Fedder, Director of the Manufacturing Futures Institute. “Through this investment to create a sustainable, permanent Manufacturing Futures Institute, CMU will feed a humming engine of innovation for advanced manufacturing, not just for Pittsburgh but for the nation.”