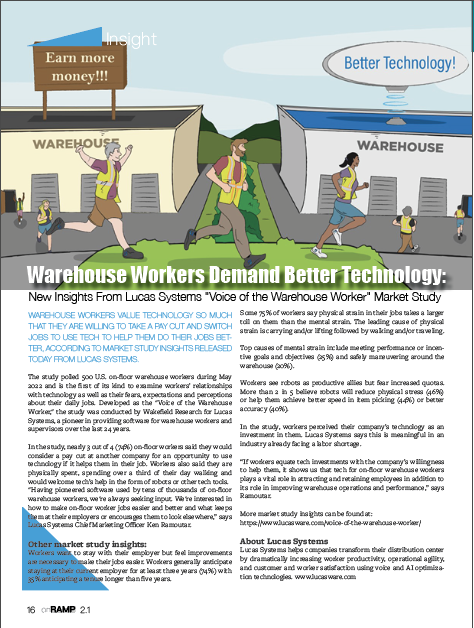 Warehouse workers value technology so much that they are willing to take a pay cut and switch jobs to use tech to help them do their jobs better, according to market study insights released from Lucas Systems.

The study polled 500 U.S. on-floor warehouse workers during May 2022 and is the first of its kind to examine workers’ relationships with technology as well as their fears, expectations and perceptions about their daily jobs. Developed as the "Voice of the Warehouse Worker," the study was conducted by Wakefield Research for Lucas Systems, a pioneer in providing software for warehouse workers and supervisors over the last 24 years.

In the study, nearly 3 out of 4 (74%) on-floor workers said they would consider a pay cut at another company for an opportunity to use technology if it helps them in their job. Workers also said they are physically spent, spending over a third of their day walking and would welcome tech’s help in the form of robots or other tech tools.

"Having pioneered software used by tens of thousands of on-floor warehouse workers, we're always seeking input. We're interested in how to make on-floor worker jobs easier and better and what keeps them at their employers or encourages them to look elsewhere,” says Lucas Systems Chief Marketing Officer Ken Ramoutar.

Workers want to stay with their employer but feel improvements are necessary to make their jobs easier. Workers generally anticipate staying at their current employer for at least three years (74%) with 35% anticipating a tenure longer than five years.

Top causes of mental strain include meeting performance or incentive goals and objectives (25%) and safely maneuvering around the warehouse (20%).

In the study, workers perceived their company’s technology as an investment in them. Lucas Systems says this is meaningful in an industry already facing a labor shortage.

“If workers equate tech investments with the company’s willingness to help them, it shows us that tech for on-floor warehouse workers plays a vital role in attracting and retaining employees in addition to its role in improving warehouse operations and performance,” says Ramoutar.

More market study insights can be found at: